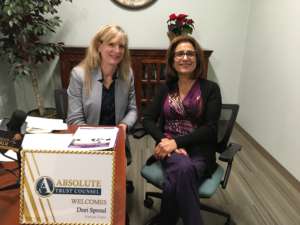 Absolute Trust Talk, a monthly podcast released by Absolute Trust Counsel, recently sat down with Dori Sproul, a family care specialist from the Alzheimer’s Association of Northern California, to discuss the myths and misconceptions associated with Alzheimer’s – a growing epidemic that affects more than 5 million people each year.

So, why are people listening? These facts are likely contributors: one in three seniors who die each year has Alzheimer’s or another dementia; and Alzheimer’s is the fourth leading cause of death in California.

Sproul reports the scary part is that many people often misinterpret Alzheimer’s symptoms as natural signs of aging or other health issues.

“This switch-up is more common than you think,” she says. “But with a disease that is the fourth leading cause of death in California, it’s important now more than ever for the public to be educated.”

The podcast can be downloaded on the Absolute Trust Talk podcast page: https://absolutetrustcounsel.com/023-knowing-alzheimers-with-family-care-specialist-dori-sproul-of-the-alzheimers-association/along with a free downloadable resource and exclusive tool: “Know the 10 Signs – Because Early Detection Matters.”

It can also be downloaded on iTunes: https://itunes.apple.com/us/podcast/absolute-trust-talk/id1371742254?mt=2.

“Our goal for Absolute Trust Talk is to get together with leaders to break down important topics into thought-provoking, approachable and easy-to-consume content for our community,” Howe says. “It’s always a little bit surprising how much people don’t understand or know when it comes to preparing for their future and the future of their family. I was shocked by some of the statistics about Alzheimer’s and just how widely it’s impacting individuals and families across the country.”

Howe adds, “Partnering with Sproul was a no brainer to spread the word not only about what the Alzheimer’s Association of Northern California does, but to highlight the disease itself. Alzheimer’s is a rapidly growing national health crisis, and the more we all understand, the better. We recommend listening and sharing this episode, because one way or another, this disease will touch us all if it hasn’t already.”

Sproul is also eager to get this important information out.

“We, at the Alzheimer’s Association of Northern California, want to educate the public on what the normal signs of aging are compared to signs that need follow-up with a physician. These are health conditions that the greater public needs to know about,” Sproul says.

Gifting Prior to Death

089: Why Your Family Might Need Lifestyle Insurance and the Latest Opportunity Benefits

088: Incapacity Failures: Plan Ahead So Your Plan Works for You