Green Burials Benefit the Environment, But They Also Provide Opportunities for Fraud

There’s a reason why more and more funeral organizations are offering green burials. The byproducts of a traditional funeral and interment are becoming a significant environmental problem. 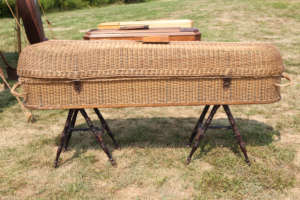 According to the Green Burial Council, each year, traditional burials in America put the following in the ground:

In essence, cemeteries are becoming landfills with some potentially devastating consequences. In addition to the waste left behind by traditional funerals, including the coffins and burial vaults, traditional methods of embalming can fill the ground and potentially, contaminate the ground water, with hazardous chemicals.

A green burial eliminates the waste and potential public health hazards by embracing simplicity and sustainable burial practices. For example, rather than burial in coffins, bodies are wrapped in shrouds made from biodegradable materials and buried in the ground, not concrete burial vaults. The goal is complete decomposition of the body, a true “ashes to ashes, dust to dust” return to the Earth.

It wasn’t until the mid-19th century that Americans began to embrace the more expensive trappings of a funeral. Aggressive marketing techniques by funeral homes and funeral organizations convinced people that the amount invested in a funeral was not only a measure of the family’s regard for the dead, but also of the dead’s status in society. Expensive caskets, over-the-top wakes, and luxurious internments became all the rage. That’s why, according to the National Funeral Directors Association, Americans spend on average, $8,500 on a funeral. However, in many areas of the country that price tag is much higher.

The cost for a green burial is much less. Gone is the fancy coffin, the embalming, and the burial vault–the most expensive products and services in a traditional funeral. While prices vary, experts say the cost for a grave site and interment in a green cemetery can range between $1,000 and $4,000 for a body. A grave site and interment for cremated remains ranges from $200 to $1,000. However, it should be noted that cremation is not considered an environmentally friendly practice. Experts say the carbon footprint of cremation is the equivalent of a 500-mile trip by automobile.

While green burial is an environmentally sound and less-expensive option, there are only about 60 green cemeteries in the United States. Some are contained within conventional cemeteries while others are located on separate tracts of land, often adjacent to wildlife or nature preserves. Green cemeteries:

Because space for green burials is limited, there are several other options available. For example, in a traditional burial, embalming can be eliminated and a shroud or a biodegradable casket used. Some cemeteries will permit you to omit the burial vault or permit the use of a concrete grave box with an open bottom, holes drilled in the bottom of the vault, or the vault inverted without its cover, so that the body can “return to the earth.” In addition, many states permit burial on private property, eliminating the need for burial in a cemetery. However, it may be necessary to establish and mark a family plot so that remains are not disturbed if the property is sold or falls into disuse.

A Green Funeral Practices Certificate is offered by the National Funeral Directors Association. It certifies that a funeral home has adopted responsible environmental practices and offers products and services that are environmentally-friendly. Included in those offerings are biodegradable caskets and temporary, non-toxic preservation for open casket viewing.

While many aspects of the funeral industry are regulated by the Federal Trade Commission, the government has not yet developed standards for funeral homes or cemeteries offering green burials. However, the Green Burial Council certifies providers and requires that they publish their green burial offerings, such as their biodegradable and non-toxic methods of preparing and restoring bodies. The Council rates providers on other criteria, but currently lacks the ability to monitor for compliance with their standards.

It is important that anyone interested in a green burial do their homework. Explore the options available for green funerals/burials and compare prices from multiple providers. Until this aspect of the funeral industry is regulated, the consumer must be wary and aware.

How to Avoid the Most Common Estate Planning Mistakes

Why Do I Have to Complete Beneficiary Designation Forms?