“I’m telling you, Mom had a big bruise on her leg when I visited her yesterday at the nursing home,” she told her sister, June. “She says she doesn’t remember how it happened. When I asked a nurse, all she said was, ‘Oh, your mother is always falling. She doesn’t always use her walker.’ Mom doesn’t have a walker. You know she uses a cane. And this isn’t the first time I’ve noticed a bruise. A few weeks ago, she had one on her arm. They told me then she tripped on a rug and fell.” Julia shook her head. “I don’t believe it.” 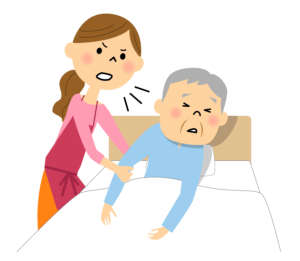 June said, “Well, maybe Mom is just becoming clumsy. I mean she’s 87. And she has dementia.”

Julia scowled. “That’s not all. Then Mom tells me that they are making her wear adult diapers during the day because there aren’t enough people available to help her to the bathroom. When she pushes her buzzer for assistance, sometimes it takes more than an hour for anyone to respond, if at all. She was pretty upset about it. That’s not right.”

“But what can we do?” asked June. “I think we are pretty much at the mercy of the nursing home. It was the only facility available in the area for people with dementia. If we complain too much, they might kick her out. Then what? I think we should just keep our mouths shut.”

Tears welled in Julia’s eyes. “Just because Mom is old and can’t live on her own doesn’t mean she isn’t entitled to dignity and respect. I think she is being mistreated. We need to get to the bottom of this.”

June sighed. “But how? It’s not like we can go in there undercover and investigate. We are 40 years younger than everyone in there. Don’t you think we’d be noticed? And we can’t be there 24/7 to protect her. We have jobs and families. Where would we find the time?”

“I think we should call the Governor or maybe a Senator. Someone has to know what to do. Just because we don’t, doesn’t mean we should ignore our concerns. I would never forgive myself if I found out Mom was being mistreated and we did nothing about it.”

June said, “Well, let’s start by contacting the state. Maybe they can tell us what to do.”

Julia nodded. “I am sure we can find something on the Internet, too. If Mom is being abused, we are going to do something about it.”

According to the U.S. Nursing Home Abuse Center, an estimated one to two million seniors, age 65 and older, have been mistreated, injured, or exploited by a caregiver. A study by the National Elder Abuse Incidence Study indicated that only about 20 percent of such cases are reported. The Abuse Center also reports that most recent studies indicate that between seven and ten percent of the elderly suffered from at least one episode of elder abuse within the past year, and in a study of 2,000 nursing facility residents, there was an abuse rate of 44 percent and a neglect rate of 95 percent.

Fortunately, in California, legislation has been enacted and programs created to protect our most vulnerable citizens. In Contra Costa County, for example, when families suspect a family member is being mistreated or abused in a long-term care facility, they can turn to the Ombudsman Services of Contra Costa County (OSCC), a group of trained volunteers and staff who advocate for the more than 9,000 residents in long-term care, such as nursing homes, assisted living housing and related facilities.

By law, the OSCC is required to investigate reports of known or suspected abuse. When abuse is found, the information is referred to local law enforcement or the California Attorney General’s Office for further investigation and possible prosecution.

Created to address circumstances that negatively impact the health, safety, and dignity of long-term care residents, the program is dedicated to providing swift solutions to reported problems. The OSCC accomplishes this by:

In addition, OSCC staff regularly visits the more than 400 long-term care facilities located in Contra Costa County to ensure OSCC services are accessible to residents, their families, and facility staff.

To report suspected elder abuse at a long-term care facility or for more information, contact Ombudsman Services at (925) 685-2070 or visit their website at www.ccombudsman.org

Special Needs Planning Must Be Multi-Generational

Juggling Work and Caregiving: How to Create Balance