The population of seniors in the United States is growing rapidly. Data from the U.S. Census Bureau indicates that people 65 and older will make up 20 percent of our country’s population by 2030. Along with this increasing population come increasing reports of elder financial abuse. It is only going to become more and more important for all of us, professionals, friends and family members, to be aware of this problem and be prepared to recognize it and respond appropriately.

Elder financial abuse means taking or assisting in taking an elder’s property for wrongful use or with the intent to defraud the elder or by exerting undue influence upon the elder.  The property taken is broadly defined.  It could be real estate, cash, securities or tangible items.  Financial elder abuse is both a civil wrong and a crime. 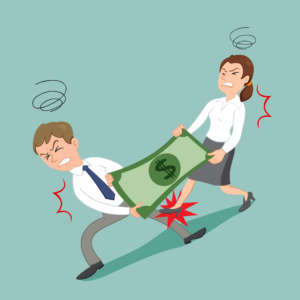 People of any age can be victimized financially, but seniors tend to make more attractive targets than younger people for a number of reasons. First, they were raised in a much simpler time and tend to be more trusting than younger people. They often live alone, which adds to their vulnerability. They are much more likely to have land lines and to answer the phone when it rings, making them vulnerable to phone scams. Finally, the most obvious reason, after a lifetime of working and saving, seniors have assets!

Elder financial abuse can occur in a variety of ways. Some scams are perpetrated by strangers. Well-known stranger scams include:

Sadly, far more common is financial elder abuse committed by friends, neighbors, caregivers and family members. As a senior becomes frailer and less able to do things for himself, he may become dependent upon others.

This can start very simply and naturally, such as rides to the doctor offered by a friend or grocery shopping done by a neighbor who’s going shopping anyway. These are all good things. As the senior becomes increasingly dependent, some people, certainly not all, take advantage. The neighbor is now doing the senior’s shopping and buying things for herself with the senior’s credit card. Taken to its extreme, the free will of the senior is overcome by the person who, because of the senior’s dependence upon him, is able to influence the senior to act as the “helper” desires. This situation is legally called “undue influence” and is a common means of committing elder financial abuse.

Some outward signs of undue influence include:

There are legal remedies that we can pursue when an elder is victimized. The perpetrator can be sued and forced to repay the wrongfully gotten money. The perpetrator can even be prosecuted criminally in some cases. However, it is rare for someone who has been ripping off a vulnerable senior to stockpile his ill-gotten gains. In most cases, by the time the elder abuse is discovered, the money has been spent.

The better bet is prevention. And prevention can encompass lots of strategies, but they pretty much all come down to awareness and being pro-active. A senior who has had a long, trusting relationship with a financial advisor or an accountant benefits tremendously from those trusted professional relationships.  They have someone looking at statements and expenditures several times a year and asking questions when things don’t look right. If you are a concerned child or close relative of the senior, ask to see statements and accompany your parent to meetings with her professionals so that you can ask questions and get the whole picture. Pay attention to new or newly resurrected relationships. Don’t be afraid to say something.  If you wait, it may be too late.

How Long Does It Take to Receive My Inheritance and Why?