Agent Orange was a defoliant the United States Military used during the Vietnam War to clear jungle vegetation. Veterans who were exposed to it may have certain related illnesses for which they can receive disability Compensation. There are two parts to qualification: location and dates of service and the related illnesses. 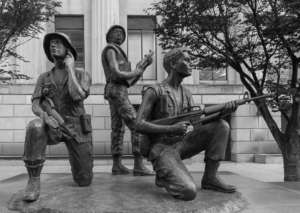 The service requirements for an Agent Orange claim are as follows:

Service for any length of time between January 9, 1962 through May 7, 1975 that occurred in the Republic of Vietnam, or aboard a U.S. Military vessel that operated in the inland waterways of Vietnam, or on a vessel operated not more than 12 nautical miles seaward from the demarcation line of waters of Vietnam and Cambodia, or on regular perimeter duty on the fenced-in perimeters of a U.S. Army installation in Thailand or a Royal Thai Air Force base. Outside of the above service dates, you may still be eligible if you served in or near Agent Orange during its production, transportation, testing, storing, etc. More specifics can be found at https://www.va.gov/disability/eligibility/hazardous-materials-exposure/agent-orange/.

Most veterans who were infantry and on the ground in Vietnam have been presumed exposed to Agent Orange. The related illnesses are considered presumptive, meaning that if a Veteran meets the service requirements AND has one of the following illnesses, the illness is presumed to be caused by Agent Orange exposure and all the Veteran has to show is his or her service record and proof of diagnosis to be eligible for Compensation. This does not mean that the Veteran has to be completely disabled, but the greater the disability the greater the Compensation.

The illnesses that are presumed to be caused by Agent Orange are as follows:

If a Veteran has an illness that is not on the list but was believed to be caused by Agent Orange exposure, a claim can still be filed, but evidence will need to be submitted in favor of the claim that it was caused by the Agent Orange.

Agent Orange Compensation is one of the easiest Compensation claims a Veteran can file because the list of illnesses are presumed and the only proof required are diagnoses and service records. If you or a loved one are a Veteran of the Vietnam War and have any of the listed diseases, Type 2 Diabetes being the most common, you may be eligible for VA Compensation.

Looking for more information on probate? Visit our probate resource page at https://absolutetrustcounsel.com/practice-areas/probate/ for guidebooks, podcasts, videos, and more!

Use Your Estate Plan to Provide for Pet’s Continued Care