The doorbell would not stop ringing. Finally, 80-year-old Mary activated her video doorbell and asked hesitantly, “Who is it?”

“My name is Manny Pearson, ma’am. Your son, Jake, sent me. He’s in jail and needs bail money. No one else is answering their phone, so he asked me to come by and get a check from you. He needs $1,000 or they’re going to throw the book at him.” 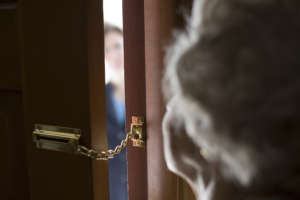 The man laughed. “I’ve called him that since college, ma’am. Guess he never shared that, huh? Anyway, if you could just write the check or give me your debit card, I can be on my way.”

Mary frowned. Her daughter handled her money, so she didn’t have a checkbook. But she had some mad money stashed away. Maybe she had enough. After all, she didn’t want her son sitting in jail. He had a wife and family to get to. Finally, Mary said, “I don’t have a checkbook, but I do have some cash. Would that would be alright?”

“Sure,” the man said smoothly. “Then we can get John out of jail licked-split. He’s scared ma’am. Real scared.”

Mary went to her secret place and pulled out the money hidden there. Slowly, she counted. She had just $300. She walked back to the doorbell device and said, “I’m sorry. I only have $300. I will have to go to the bank to get more. But my daughter has to co-sign my checks. If you’ll just wait a minute, I’ll call her.” There was no response. “Hello?  Are you there?” Mary peered out the door and she saw a man walking away from her home.

Quickly, Mary walked to her phone and called her daughter. “Diana, the strangest thing just happened. A man came to the door and said John was in jail and he needed $1,000 to get him out. We need to get to the bank and get that money.”

“Mother, is the man still there? Did you let him into the house? Did you give him any money?”

“No, he left. But we need that money to get John out of jail.”

Diana said gently. “Mom, I’m coming over, then we’re going to call the police. John is on vacation in Hawaii, remember? Besides, if he needed bail money, he wouldn’t ask you, he’d ask his wife or one of his children. That was a scammer. Thank God you didn’t answer the door.”

According to a recent study by the U.S. Centers for Disease Control and Prevention, the financial exploitation of older adults, or financial elder abuse, has become a serious health problem. Nearly one out of every 18 adults have been the victim of a financial scam or fraud, and those are just the crimes that have been reported. There are many reasons older adults are targeted, including:

It is important to acquaint senior family members with the more popular scams that occur in this country and encourage them to report any suspicious contacts.

There are, of course, many more fraudulent schemes that target vulnerable adults. Scammers are creative. They are also skilled at seizing opportunities as they arise. That’s why it’s important to take steps to protect seniors and their assets. Home security, joint accounts, powers of attorneys, conservatorships, and income trusts are all strategies that can be employed to protect finances.

However, it is important to be proactive. Acting after a senior has been scammed rarely makes them whole. In fact, it often leaves them financially and emotionally devastated.

Medi-Cal Discrimination/Fraud a Problem in Some Nursing Homes