Margo stormed into her diner, slapped a newspaper down in front of her sister, Irene, and exclaimed, “Look at this! This could happen to us!”

Irene glanced at the paper and her face scrunched up in confusion. “What on earth do we have in common with Tom Petty?” She peered up at her sister. “He died, you know.”

Margo glared at her. “That is exactly my point. Read the story. He left his assets in trust for his two daughters and his second wife. Now they’re fighting over who gets to make the decisions, who gets a vote in those decisions, whether those decisions are sound. Oh, it’s one big mess!”

Irene held up a finger and went to serve a customer coffee. When she returned, she said, “Still not catching your point, dear.”

Margo ran a hand through her fiery red hair. “After both of us die, this diner and the rest of our assets go into a trust for our children. What if they get into some sort of catfight over who controls what? They could run this diner into the ground and destroy our legacy. Do you want that to happen?”

Irene settled onto a stool at the counter. She sighed. “I was kind of hoping that they would behave like adults and work things out themselves.”

Margo grunted. “Really? Your daughter and my son are like oil and water. And your son simply ignores everything my daughters say.” Margo buried her head in her hands. “Oh, why did we ever think this was a good idea?”

Irene patted Margo’s arm. “Well, while I think we stated our intentions pretty clearly in the trust document, let’s go talk to our lawyer. Maybe show him this article. Even I know money makes people crazy and some of our kids are ripe for a freak out. Let’s make sure what we want is set in stone. Then the kids will just have to live with it.”

The dispute over Tom Petty’s estate is centered around the meaning of two words, “equal participation.” Do the words mean all parties to the trust have a say in decision making? Or should they be interpreted to mean the trustee of the trust has the authority to make the final decisions, after consulting with other beneficiaries of the trust? In the case of Petty’s trust, that determination tips the balance of power in how the trust is managed. There are three beneficiaries to the trust: Petty’s two daughters and his second wife. His wife is the trustee of the trust.

If “equal participation” is interpreted to mean that the three have an equal say in decisions, the two daughters could band together and block every decision the trustee/second wife makes. They would rule “by majority.” If the intent is to grant the trustee/second wife final decision-making authority, after consulting with the daughters, then she has the power to manage the trust despite their input.

The dispute points out the importance of clear language when creating a trust. In this case, either interpretation is plausible. The final decision may rely on records of discussions Petty had with his lawyer when creating the trust. Absent such records, the court will determine the intent behind that language, and there is a 50/50 chance that the court will get it wrong.

There are no concrete rules on what words should or should not be used in a trust document. Generally, a grantor transfers assets to a trustee to be managed for the benefit of others. He or she puts that agreement in writing. To make the document legal, certain provisions must be contained in the document and certain procedures must be followed to ensure it is properly executed (signed). However, no specific language is required when instructing the trustee how to manage the trust. And that’s when problems in interpretation can occur.

To avoid a “Petty Dilemma,” follow these simple steps:

Trusts are intended to create a financial legacy, your legacy. To ensure that it adequately represents your vision, it is imperative that your intentions are stated clearly. Leave nothing open to the interpretation of others. 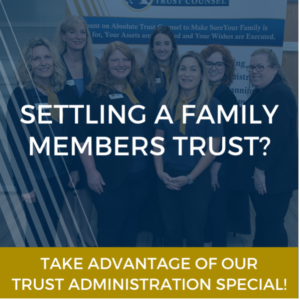 Navigate the Administration of a Family Member’s Trust with Ease

The job of a trustee isn’t as easy as one may think. You must give legal notices, retitle assets, file tax returns, understand a legal document, and perform a variety of tasks most people find unfamiliar. As a trustee, if you forget a step or make a mistake, you could be held liable.

Protect yourself, have a plan, and find out the next steps about your specific trust. Schedule a one-hour roadmapping session with Absolute Trust Counsel. We will review your trust, answer your questions and develop an action plan to get the job done right.

077: Retirement Planning for Your Brain